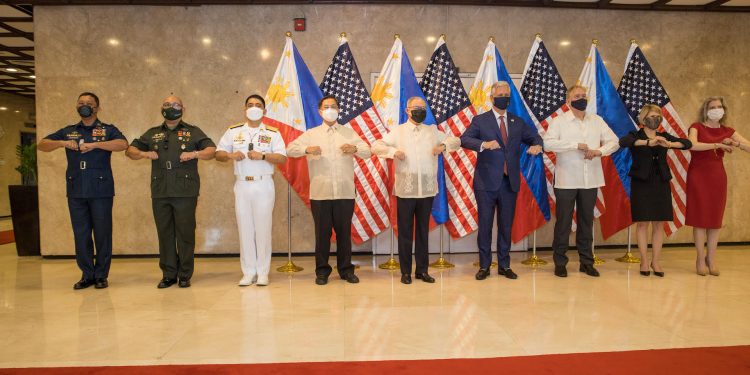 Metro Manila (CNN Philippines, November 23) — The United States on Monday vowed to continue helping the country protect its sovereign rights and maritime resources, as US National Security Adviser Robert O’Brien blasted China for being “aggressive” in its incursions in the South China Sea.

O’Brien led the ceremonial turnover of $18-million worth of weapons systems, including precision-guided munitions, for use by the military to counter terrorism. He said the donation was the result of the phone call between US President Donald Trump and President Rodrigo Duterte in April.

Aside from counterterrorism support, O’Brien said the US will continue to be an ally when it comes to maritime security, reiterating America’s recognition of the 2016 arbitral tribunal ruling on the South China Sea that negated China’s historic and economic claims to much of the disputed waters.

O’Brien, a lawyer, took a hardline stance against China’s incursions in the South China Sea.

“The oil, gas, minerals, fisheries within the exclusive economic zone in the Philippines belong to your country. We don’t want to go back to an era of ‘might makes right,'” he added.

US Secretary of State Mike Pompeo in July asserted the stand of the US that Beijing’s claims in the South China Sea are “completely unlawful” and accuses the Asian powerhouse of “bullying to control them.” He also took aim at China’s attempts to establish maritime claims inside other countries’ Exclusive Economic Zones — areas extending 200 nautical miles into the sea from the coast of a sovereign state.

China, meanwhile, hit back at the US official’s remarks. The Chinese Embassy in Manila said O’Brien’s comments attempted to sow discord between China and the Philippines, claiming the visit’s aim was to create chaos between the two nations for the “selfish interests of the US.”

“We firmly oppose these remarks which are full of Cold War mentality and wantonly incite confrontation,” it said in a statement late Monday. “We urge the US side to respect China’s territorial sovereignty and maritime rights and interests in the SCS, respect the joint efforts of China and ASEAN countries for maintaining a peaceful and stable South China Sea and stop interfering and inciting confrontation in the SCS.”

Meanwhile, O’Brien also welcomed the Philippines’ decision to extend the suspension of the abrogation of the Visiting Forces Agreement for another six months.

“We look forward to the Visiting Forces Agreement continuing to facilitate closer cooperation in combating terrorism,” he said.

The VFA is the first of two agreements between Washington and Manila about the treatment of their troops when they are in the US or the Philippines. The 1998 deal includes provisions on visa and passport policies for American troops, and rights of the US government to retain jurisdiction over its military personnel, among others.

Great Decisions Speaker Hank Hendrickson on "The Philippines and the U.S."

Join or Renew your Membership