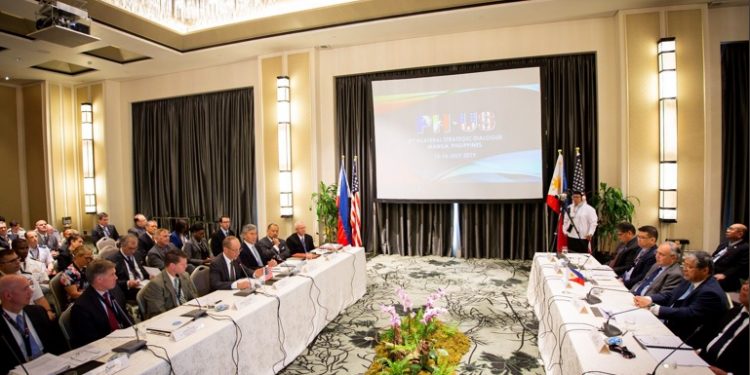 The text of the following statement was released by the Governments of the United States of America and the Republic of the Philippines on the occasion of the July 15-16, 2019 U.S.-Philippines Bilateral Strategic Dialogue.

The Republic of the Philippines and the United States of America held the Eighth Bilateral Strategic Dialogue from 15 to 16 July 2019 in Manila, Philippines.  Department of Foreign Affairs Undersecretary for Policy Enrique Manalo and Department of National Defense Undersecretary Cesar Yano co-led the Philippine delegation.  Assistant Secretary of State for East Asian and Pacific Affairs David Stilwell and Assistant Secretary of Defense for Indo-Pacific Security Affairs Randall Schriver co-led the U.S. delegation.

The Bilateral Strategic Dialogue is the principal forum for discussing the full range of political, security, and economic cooperation between the Philippines and the United States, comprising four working groups: 1) Defense and Security; 2) Economics, Development, and Prosperity; 3) Regional and Global Diplomatic Engagement; and, 4) Rule of Law and Law Enforcement.

The discussions between Foreign Affairs Secretary Teodoro L. Locsin, Jr. and Secretary of State Michael Pompeo in March 2019 and the Joint Statement resulting from the meeting in Manila between President Rodrigo R. Duterte and President Donald J. Trump in November 2017 provided strategic direction to the Dialogue.

Both sides recognized the importance of a strong Philippines-U.S. alliance in enhancing security cooperation and promoting regional stability and prosperity.  They recalled Secretary Pompeo’s statements on the 1951 Mutual Defense Treaty (MDT) during his March 2019 visit to Manila, particularly the clarification that the South China Sea (SCS) is in the Pacific, and that any armed attack on Philippine armed forces, public vessels, or aircraft in the SCS will trigger Article IV of the Mutual Defense Treaty.  Noting this, senior officials discussed a wide variety of issues of mutual interest and reaffirmed their commitment to deepening the alliance and expanding areas of cooperation.

The Philippines and the United States pledged to enhance already robust defense cooperation, including by improving defense infrastructure, updating personnel and logistics procedures, and increasing mutual communication and coordination on operational elements of regional security.  In this context, both sides commit to begin planning on a range of activities to improve maritime domain awareness.

Both sides reaffirmed their commitment to uphold freedom of navigation, overflight, and other lawful uses of the SCS, and stressed the importance of peacefully resolving disputes in accordance with international law, as reflected in the Law of the Sea Convention.  Both sides also emphasized the importance of concluding an effective and substantive Code of Conduct (COC) that would not prejudice the rights under international law of both claimant states and non-claimant states in the SCS.

The Philippines and the U.S. delegations reaffirmed their commitment to deepening the extensive economic relationship between the two countries and undertook substantive discussions on cooperating in areas such as science and technology, agriculture, fisheries, health, environment, energy, infrastructure, connectivity, and cyber security, among others.

The Philippines and the United States recognized the importance of the bilateral Trade and Investment Framework Agreement (TIFA), which has enabled both countries to make concrete and significant progress on outstanding bilateral trade issues.  They also look forward to further discussions under the TIFA mechanism, recalling statements of both countries’ leaders in support of increasing trade in a manner that observes the principles of free, fair, and reciprocal trade.

The Philippine and U.S. delegations emphasized the importance of the rule of law, human rights, and fundamental freedoms.  The senior officials pledged to continue working together to effectively eliminate human trafficking and in this regard, noted the Tier 1 ranking maintained by the Philippines in the 2019 Trafficking in Persons Report.  Both sides committed to collaborate more closely on enhancing legal aid services as well as on countering transnational crimes such as human and drug trafficking.

The senior officials pledged to deepen their work to counter terrorism and violent extremism through improved information sharing, and port and aviation security, in order to prevent terrorist attacks within the Philippines, and the transit of foreign terrorist fighters into and within the Philippines.  In addition, both delegations committed to upholding international best practices to detect and combat money laundering and the financing of terrorism.

The United States acknowledged the importance of the ASEAN Outlook on the Indo-Pacific and recognized ASEAN centrality as integral to its Indo-Pacific Strategy.  Both sides committed to deepen their engagement with partners in the region based on inclusiveness, openness, rule of law, good governance, and respect for international law.

At the conclusion of the BSD, the Philippines and the United States signed the following:

The Philippines and the United States reaffirmed the importance of regular high-level consultations and the opportunity to have a common understanding of issues, and thus intend to convene the ninth BSD in Washington, D.C. in 2020 to continue these discussions in furtherance of forging an even stronger partnership under the Philippines-U.S. alliance.

July 25 - The Philippines: A Mid-Term Assessment