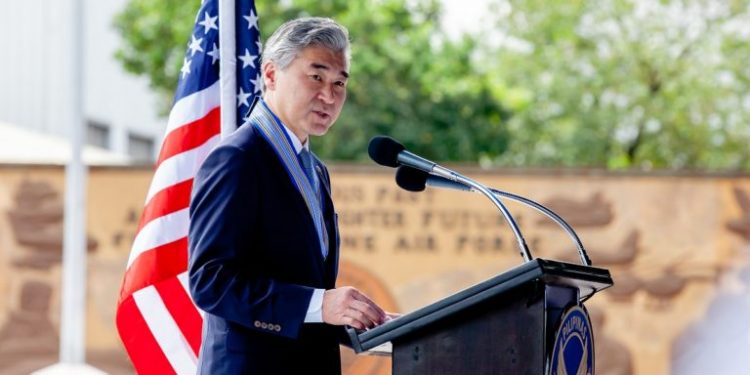 Ambassador Sung Kim at the Handover ceremony of the Bells of Balangiga, Villamor Air Base, Manila, December 11, 2018.

Yesterday, a US Air Force plane bearing three historic bells from San Lorenzo de Martir Church in Balangiga landed at Villamor Air Base. These bells were taken 117 years ago; it was my honor to return them.

Their safe return is thanks to the efforts of US Secretary of Defense James Mattis, supported by US President Donald Trump, and is driven by respect for the Philippines, our friend, partner and ally.

It has been a long road home for these bells, which were caught up in the aftermath of the tragic conflict that raged across this archipelago at the turn of the last century. The US Army’s Ninth Infantry Regiment, whose C Company was garrisoned at Balangiga, returned with one of the bells to its home garrison in Sackets Harbor, New York. This bell followed the regiment to subsequent assignments, most recently residing at a US Army base in South Korea. The two other bells were sent to Camp D.A. Russell in Cheyenne, Wyoming, with the 11th Infantry Regiment, where the bells were displayed as part of a memorial to fallen US service members.

Good-hearted individuals and groups labored for decades to bring the bells home. Former presidents, Cabinet secretaries, Philippine and US ambassadors, historians, philanthropists and many others worked tirelessly to raise awareness of the history of the bells and to advocate for their dignified return.

Others viewed the bells in a very different light. In the state of Wyoming, some US military veterans expressed their belief that the two bells housed there were an integral part of a war memorial that should not be deconstructed or disturbed. In fall 1999, Congress passed legislation that made it unlawful to remove the two bells from the memorial on the base, challenging efforts to lobby for their return.

The turning point in this century-long saga came in October of this past year, during the 2017 ASEAN Defence Ministers’ Meeting in Clark. Secretary Mattis met with Defense Secretary Delfin Lorenzana to discuss security cooperation and opportunities to further strengthen the US-Philippine defense relationship. At this meeting, Secretary Lorenzana raised the issue of the Balangiga bells.

Later that day, in a meeting with President Duterte, Secretary Mattis stated definitively that it would be his personal initiative to find a way to return these religious artifacts. In the secretary’s words, “all wars end,” and it was time to heal a wound that had strained the US-Philippine relationship for too long.

Following this important meeting, I maintained direct communication with the secretary, and my colleagues and I worked with his outstanding staff to ensure the bells’ swift return.

In Washington, Secretary Mattis sought legislation that would make it legally permissible to return the bells. Members of Congress and senior officials in the Department of State and National Security Council endorsed returning the bells. The American Legion and Veterans of Foreign Wars both passed national resolutions supporting the bells’ return. These unambiguous expressions of support clearly demonstrate the special bond veterans and the US public share with the Filipino people.

On Aug. 9, Secretary Mattis announced his intent to return the bells, which began a legally required 90-day waiting period. On Nov. 14, the secretary traveled to F.E. Warren Air Force Base and, in a solemn ceremony, officially informed Philippine Ambassador to the US Babe Romualdez that the bells would, at last, be returned to the Philippines.

At the culmination of his moving speech, he turned to Ambassador Romualdez and asked him to “Bear these bells home, back to the Catholic Church, confident that America’s ironclad alliance with the Philippines is stronger than ever.” And so the bells began their journey home.

This decision to return the bells is consistent with our values and overwhelmingly viewed as the right thing to do. From World War II to today’s struggle to defeat the Islamic State group and the scourge of terrorism, our militaries have fought together, bled together, at times died together. As your ally and friend, we will forever honor and respect this shared history.

Today, we do not focus on looking back or relitigating a painful chapter in our past, but investing in our shared future. In Secretary Mattis’ words, “In returning the bells of Balangiga to our ally and our friend—the Philippines—we pick up our generation’s responsibility to deepen the respect between our peoples.” Ours is a close friendship, and we do not take it for granted. Strengthening and maintaining it requires sustained commitment and investment.

To these bells, the bells of San Lorenzo de Martir: Welcome home. We wish you safe onward travel to Samar and your church in Balangiga.