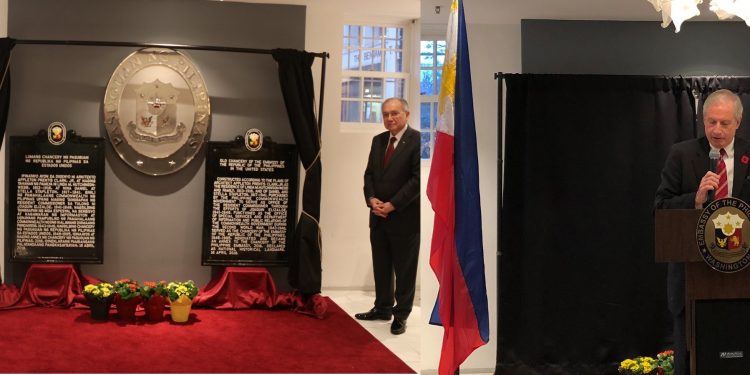 Thank you and Good afternoon, Ambassador Romualdez, Chairman Escalante, Acting Director Bhalla, friends from the Embassy, members of the US-Philippines Society, and distinguished guests, including the honorable Michael Klecheski and Richard Blackwood of the State Department. On behalf of Ambassador John Negroponte and Mr. Manuel V. Pangilinan, co-chairs of the US-Philippines Society, I am delighted to join you in this celebration.

It is fitting that we gather to mark the designation of the chancery as a Philippine historical landmark and commemorate the 83rd anniversary of the establishment of the Philippine Commonwealth on this Veterans Day weekend.  Let me explain.

Sunday, November 11th is the 100th anniversary of the armistice that ended World War I. Those who survived were deeply shaken by the staggering costs of the Great War, which claimed more than 40 million casualties, led to the collapse of empires, and tested faith in the institutions of government. In marking Armistice Day, now known here as Veterans Day, we remember not only the end of that war, but the beginnings of efforts to construct new global arrangements embodying the principle of “self-determination of peoples.” This is the point that connects events of 100 years ago to this building and the people who worked here on a mission to achieve self-determination and independence of the Philippines, with support from the government of the United States.

We recall that it was during World War One, as Wilson was formulating his 14 Points, that Congress passed the Jones Act, with an explicit commitment to Philippine independence, a commitment that historians will view, not in isolation, but as the early signs of an emerging shared vision for nations and peoples to control their own destinies.

Fast forward through the short span of years from World War One to the Commonwealth period and World War Two, and we find another link between our two countries and the observance of Veterans Day. For it was during the Commonwealth that so many Filipino and American soldiers fought and sacrificed together to achieve peace, realize full independence, and participate in efforts to create a new international architecture built on political, economic and security cooperation, with the aim of preventing another global conflict. Just last month, Ambassador Romualdez and others here gathered to celebrate the first anniversary of the Congressional Gold Medal for Filipino veterans, a step long overdue but now fully realized.

Looking back, it is fair to say that if those who worked so hard in this building so long ago could see us now, they would be proud. They would take pride in setting the foundations of an enduring and maturing bilateral relationship, for the rich people-to-people linkages between the two countries, for the values they shared, and for the many areas of economic and strategic cooperation that have expanded to meet 21st century challenges. They should also recognize that their work toward fashioning ties based on independence and self-determination honors the sacrifices of veterans from both countries, sacrifices that we recognize and honor on this special weekend.

Navigating a new chapter in the US-Philippines’ ‘Long Friendship’