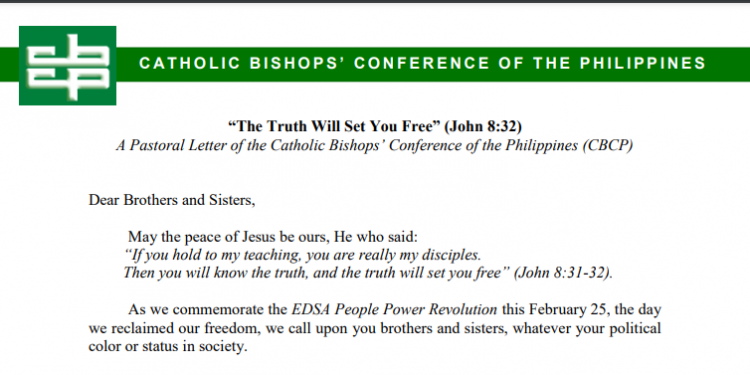 “The Truth Will Set You Free” (John 8:32) A Pastoral Letter of the Catholic Bishops’ Conference of the Philippines (CBCP)
FacebookTwitterLinkedinMix

In observance of the 36th anniversary of the EDSA People Power Revolution, the Catholic Bishops’ Conference of the Philippines issued a letter reflecting on the events of February 1986 and the preceding Martial Law period. The letter notes that the May elections are approaching and addresses people “whatever your political color.” It is in that spirit, that we share the text of the CBCP letter.

While the US-Philippines Society remains committed to non-partisanship in electoral matters, an important element of the Society’s mission is raising awareness of Philippine history and the enduring ties between our two nations and peoples. Society programming over the past decade has explored many facets of that history. In that context and in light of the key role of Church leaders during the People Power Revolution, we call attention to the CBCP’s perspective now in addressing questions it sees as a distortion of that history and the impact on the post-EDSA generation. The letter concludes with an appeal for unity, truth and faith.

“The Truth Will Set You Free” (John 8:32)
A Pastoral Letter of the Catholic Bishops’ Conference of the Philippines (CBCP)

Dear Brothers and Sisters,
May the peace of Jesus be ours, He who said:

“If you hold to my teaching, you are really my disciples.
Then you will know the truth, and the truth will set you free.
– John 8:31-32”

As we commemorate the EDSA People Power Revolution this February 25, the day we reclaimed our freedom, we call upon you brothers and sisters, whatever your political color or status in society. We are aware of the complexity of things, especially in the area of politics, as well as our different views. The present state of division among us due to politics, is unfortunate. Yet, we hope all of us consider the common good as foremost concern. Let us respect one another; – not giving in to hatred and rash judgments. Let us diligently seek the truth that we may do what is right and avoid evil.

For many of us, ‘politics‘ is a distasteful word. Yet, Pope Francis invites us all towards a renewed appreciation of politics as “a lofty vocation and one of the highest forms of charity, inasmuch as it seeks the common good” (Fratelli Tutti, #180). Can our world function without politics? He further asks (cf. FT #176).

We have no ambition of appropriating for ourselves your distinct role as laity in the just ordering of society, nor do we intend to usurp the role of the government. We are here to provide moral and spiritual guidance, in accord with our mission of proclaiming the truth from our faith.

The Truth at Stake

The elections are fast approaching, and we wish to remind you: ‘All citizens, (therefore), should be mindful of the right and also the duty to use their free vote to further the common good’ (Gaudium et Spes, #75). But we are appalled by the blatant and subtle distortion, manipulation, cover-up, repression and abuse of the truth, like: historical revisionism – the distortion of history or its denial; the proliferation of fake news and false stories; disinformation – the seeding of false information and narratives in order to influence the opinion of the people, to hide the truth, to malign and blackmail people. There are troll farms which sow the virus of lies.

Let us examine ourselves. Perhaps we, too, sow the virus of lies, which spreads wildly and numbs our consciences. This virus paralyzes our capacity to recognize God, respect truth and goodness. Thus, we do not realize that there is a ‘pandemic of lies,’ especially in the social media. This is very serious.

In this letter, we favor none but the truth. We wish to warn you of the radical distortions in the history of Martial Law and the EDSA People Power Revolution.

In 1986, some of us were already members of the CBCP. We issued a ‘Post-Election Statement,’ dated February 13, 1986, regarding the systematic disenfranchisement of voters, widespread and massive vote-buying, deliberate tampering of election returns, intimidation, harassment, terrorism and murder. In the same Statement we said: “a government that assumes or retains power through fraudulent means has no moral basis.” Thus, we asked you to see, to judge and to act, clearly not with violence, but through peaceful means. And that was what happened. The people – the NAMFREL, the Comelec computer Technicians, the Poll Officials – registrars, teachers, government workers, millions of ordinary voters together with priests and religious men and women, Radio Veritas and press people acted peacefully. They were not able to take the blatant deception and cheating. They, including Officials in the Batasan, the military, Comelec Officials, followed their conscience. And the events led to EDSA. (cf. CBCP Post-Election Statement, 1986)

We did not invent the historic event that happened in EDSA; it was a fruit of love of neighbor and faith. With you, we were simply part of it. You and the world witnessed the peaceful revolution, which was rightly called ‘People Power.’ The peaceful revolution was not an invention of one person, one party, or one color. It was a triumph of the entire Filipino People.

Many of us, Bishops, were witnesses of the injustice and cruelty of Martial Law. And up until now, the human rights abuses, the victims, the corruption, the grave debt and economic downturn of the country due to dictatorship are all well-documented. Again, we did not make these up. These are all written in our history.

We are alarmed by this distortion of the truth of history and the attempt to delete or destroy our collective memory through the seeding of lies and false narratives. This is dangerous, for it poisons our collective consciousness and destroys the moral foundations of our institutions.

Neglect of truth is detrimental for all of us, for the foundation of a good society and responsible government is the truth. Shall we allow that our children and the young be educated in lies? Can we afford to make lies become the basis of our laws and their implementation? What happens to a family or a society that is not founded on truth?

Truth is intimately related to freedom (cf. John 8:32). Disrespect for truth is disrespect for freedom. When we disregard truth, we disregard our obligation to be accountable. Can we address corruption if there is no truth? We must be ready to face the truth about ourselves.

The Politics of Truth, Goodness, Justice and Peace

Thus, and also in view of the coming elections, we call on you, Brothers and Sisters – especially the Youth, to examine carefully what is happening in our quest for a true and just society. Engage in dialogue and discernment. Listen to your conscience. Be the ones to decide. We trust in your capacity to discern what is true and good. We all seek the common good. And, in the light of the Gospel of Jesus, let us follow the path of truth, goodness, justice and peace – not the path of violence, vengeance or evil.

Let us not give up on our search and defense for truth – by way of reason and faith, by common dialogue and discernment, prayer and action. Let us have faith as we persevere in overcoming evil by goodness (Romans 12:21). May truth unite us all.

We ask for the prayers and protection of our Beloved Mother, Our Lady of Peace. May God Almighty bless all our strivings that truth and the good prevail, in the name of the Father, and of the Son, and of the Holy Spirit. Amen.

For the Catholic Bishops Conference of the Philippines,