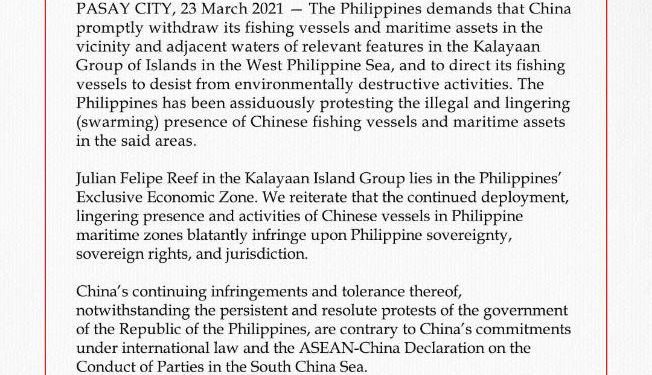 Department of Foreign Affairs
Republic of the Philippines

China’s continuing infringements and tolerance thereof, notwithstanding the persistent and resolute protests of the government of the Republic of the Philippines, are contrary to China’s commitments under international law and the ASEAN-China Declaration on the Conduct of Parties in the South China Sea.

Further, the Philippines calls on China to faithfully honor its obligations as a State Party to the 1982 United Nations Convention on the Law of the Se (UNCLOS) and to respect and abide by the final and binding 12 July 2016 Award in the South China Sea Arbitration.

In view of this position, the Philippine Government has formally lodged a new protest to the Chinese Government on the 21st of March 2021.

*Whitsun Reef is known as Julian Felipe Reef in the Philippines