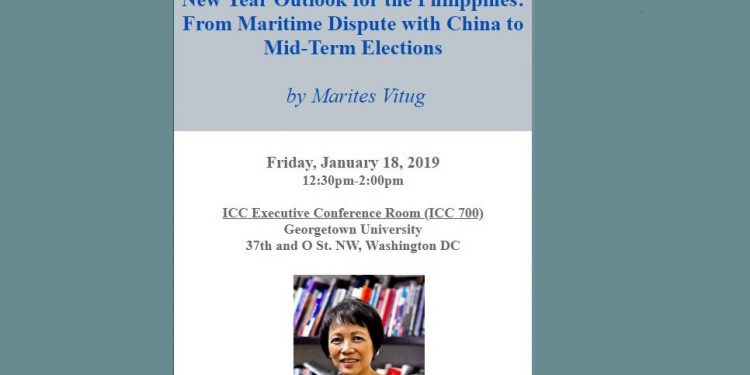 New Year Outlook for the Philippines:
From Maritime Dispute with China to Mid-Term Elections

Marites D. Vitug will discuss her new book titled “Rock Solid: How the Philippines Won Its Maritime Case against China”(Ateneo Press, 2018) and foreign policy implications. She will also share her views on the 2019 political prospects for the Philippines, in particular the mid-term elections outlook.

MARITES DAÑGUILAN VITUG is one of the Philippines’ most accomplished and respected investigative journalists, winning awards and public recognition for her books and reportage on Philippine justice, security, and political affairs.

She is author of a new book, Rock Solid: How the Philippines Won Its Maritime Case against China (Ateneo Press, 2018). Her previous book on the Supreme Court, Shadow of Doubt, laid out the premises for the present volume and earned her libel suits, since withdrawn – two of many she has faced. Marites is also the author of Power from the Forest: The Politics of Logging, her first book and a pioneering work on governance and the environment, Under the Crescent Moon: Rebellion in Mindanao (with Glenda Gloria), Jalan-Jalan: A Journey through EAGA (with Criselda Yabes), which was chosen by Asiaweek as one of the best books on Asia (1999), and Our Rights Our Victories: Landmark Cases in the Supreme Court (with Criselda Yabes).

A former Harvard Nieman Fellow and Asian Public Intellectual, Marites edited the pioneering political newsmagazine Newsbreak and has reported for Newsweek, the Christian Science Monitor, and Newsday. Her opinion pieces have been published in the International Herald Tribune and Asahi Shimbun. She is now editor-at-large for Rappler (www.rappler.com) and president of the Journalism for Nation Building Foundation.

Marites has a degree in A.B Communications from the University Of The Philippines and pursued Postgraduate Studies in World Politics from the London School of Economics.

Sponsored by the US-Philippines Society, Georgetown University’s MSFS and the Asian Studies Program