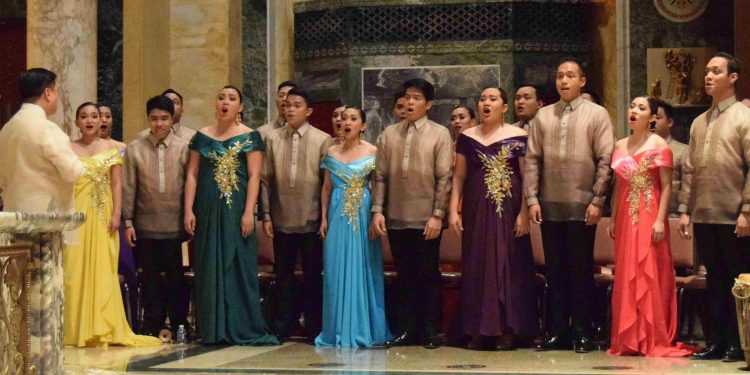 WASHINGTON, D.C.- On September 21, over four hundred parishioners and guests gathered in the historic Cathedral of St. Matthew the Apostle to attend a Eucharistic mass celebrating the patronal feast day of St. Matthew the Apostle and a benefit concert in support of recovery efforts in Houston, Texas. The church, named after St. Matthew, patron saint of civil servants, offered its premises for the concert. Fr. John Hurley, the officiating priest, pointed to the artistic murals depicting the calling of the Apostle to discipleship, describing “his scriptures spread the good news throughout the world.” 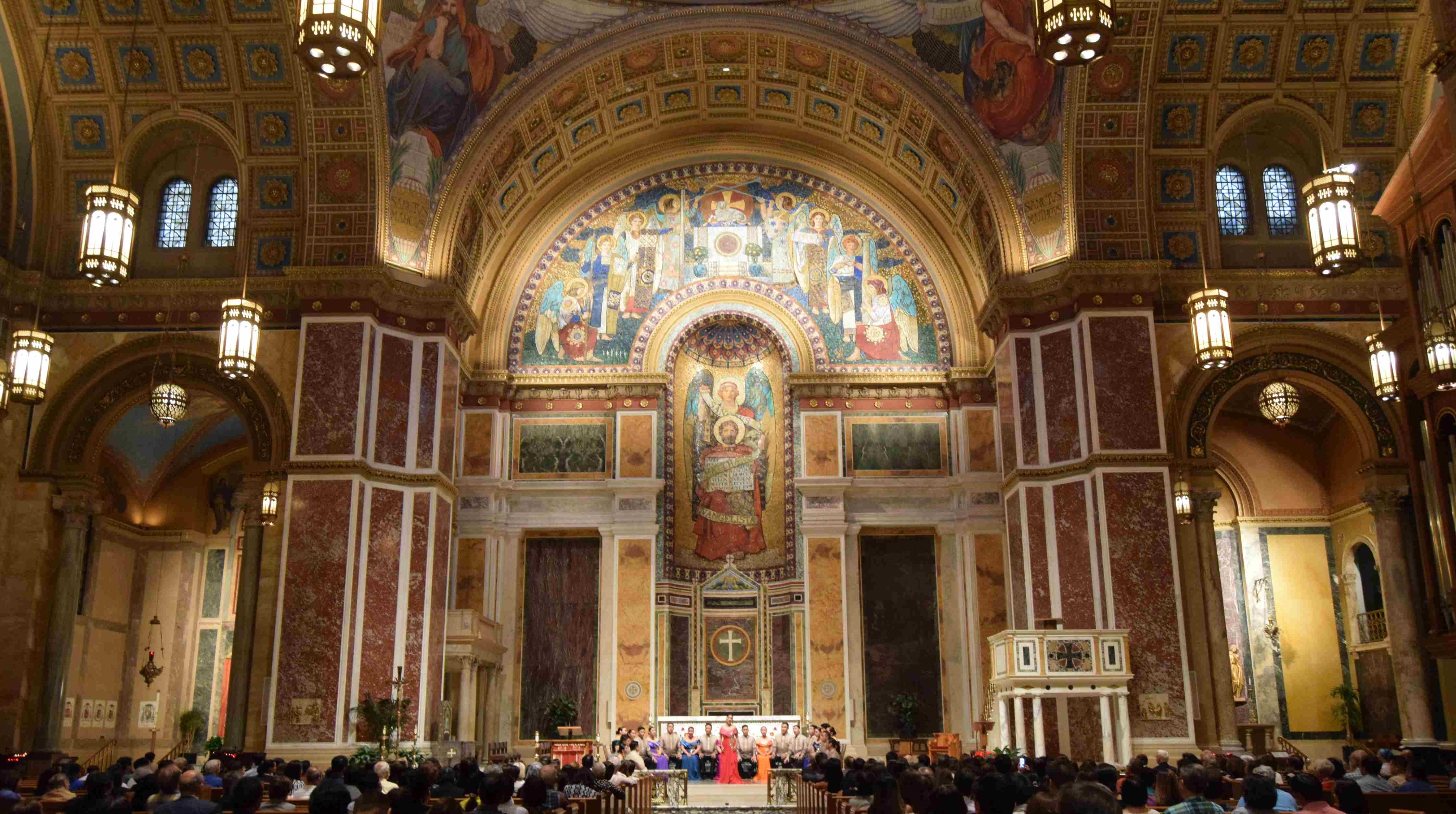 In his introductory remarks, US-Philippines Society Executive Director Hank Hendrickson recalled how Americans came to assist Filipinos when the super typhoon Haiyan devastated the Philippines in 2013. The US-Philippines Society, a 501(c)(3) charitable organization, has provided assistance to typhoon victims in Tacloban and Samar through livelihood projects, rebuilding of schools and rural health centers funded by corporate and personal donations.The evening’s concert “Singing for Hurricane Recovery” gave attention to the ongoing urgent needs of lives affected by the strongest hurricane to hit southern Texas since 1970 and the opportunity for Filipinos to reciprocate in the spirit of giving back. 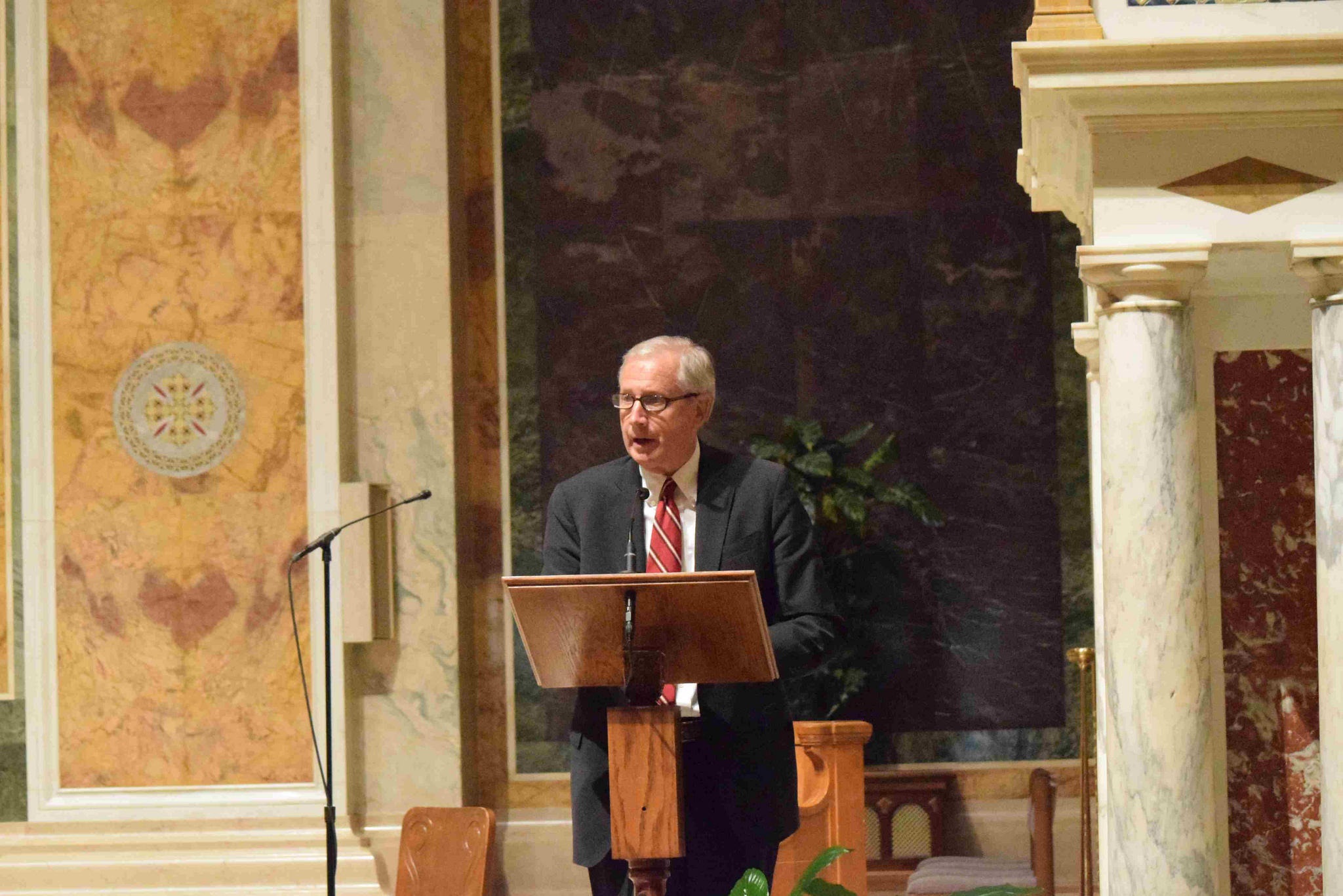 “The Philippines is no stranger to deadly storms. Our country experiences an average of 20 typhoons a year, not to mention torrential monsoon rains that cause widespread flooding. We are very familiar with scenes that are coming out of Houston and the Caribbean,” Minister Patrick Chuasoto, the Embassy’s Chargé d’Affaires, said in his remarks at the post-concert reception held at the Philippine Chancery Annex building.

“But all through these disasters, the communities here in the United States have stood in solidarity with the Philippines, giving generously of their time, effort, talent, and resources, to help our kababayans get back on their feet. This is why the Philippine Embassy is much honored to be co-sponsoring the benefit concert of the Philippine Madrigal Singers in Washington, D.C.,” he added.

The President of the US-Philippines Society, Ambassador John Maisto, noted that it was the second time in five years that the Society hosted the choral group, the first being in May 2013.

“It’s my job to tell you what a pleasure it is to have you here because you represent the best in Philippine culture,” Ambassador Maisto remarked to the Madz. 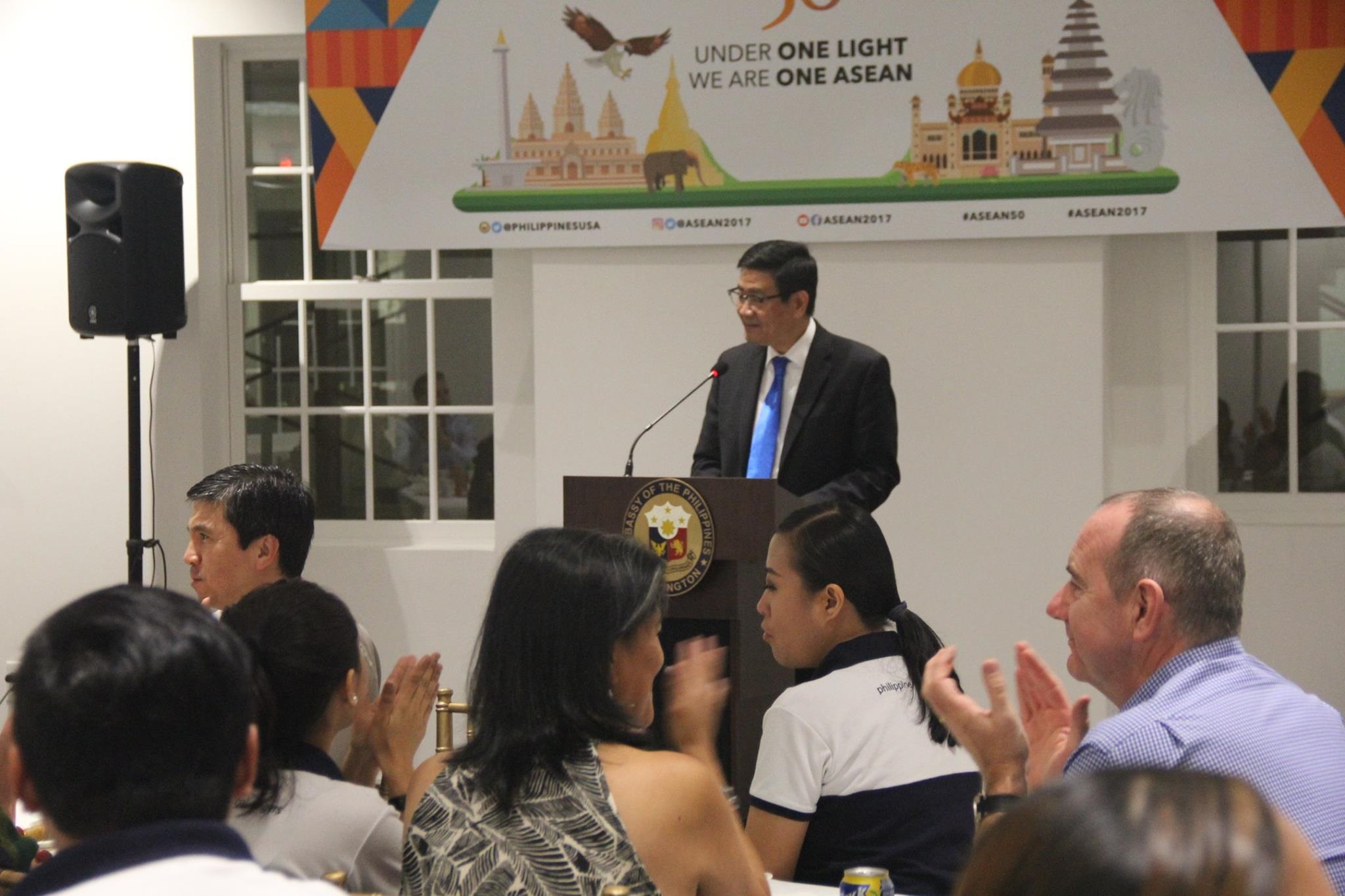 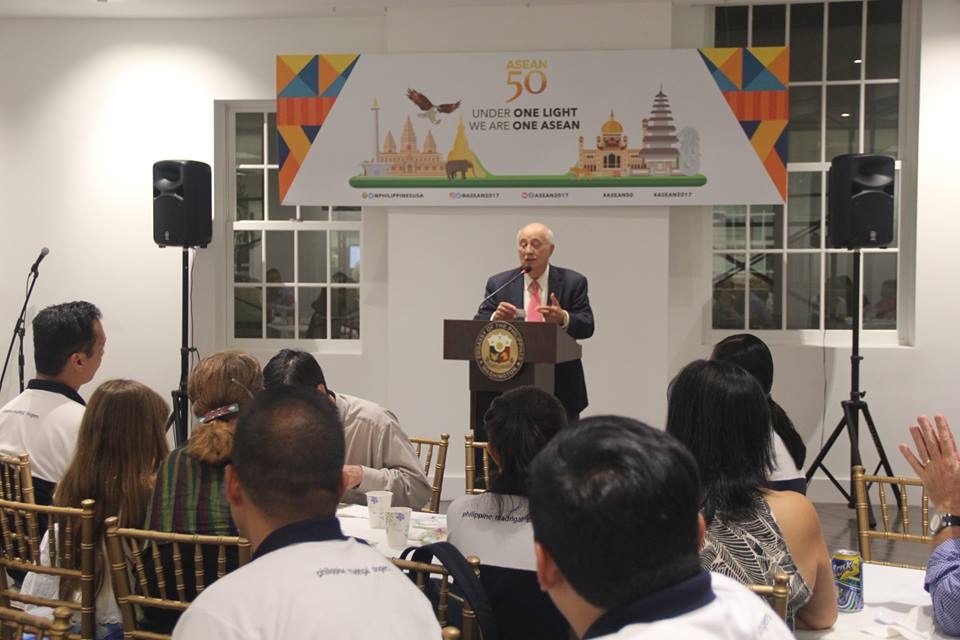 Co-sponsored by the US-Philippines Society, in cooperation with the Philippine National Commission for Culture and the Arts (NCCA) and the Philippine Embassy in Washington, D.C., the concert served to promote the best of Philippine culture and share in the spirit of “bayanihan” with the American audience. As a gesture of the legendary Filipino hospitality, several Filipino-American families opened their homes to the visiting members of the choir.

Under the direction of Choirmaster, Mark Anthony Carpio, The Philippine Madrigal Singers are on a US Concert Tour from August through mid-October to help nurture Philippine culture and arts, while promoting a culture of peace through music. The Madz is a UNESCO Artist for Peace and the first Filipino ensemble to receive the Brand Laureate Premier Award for Excellence. 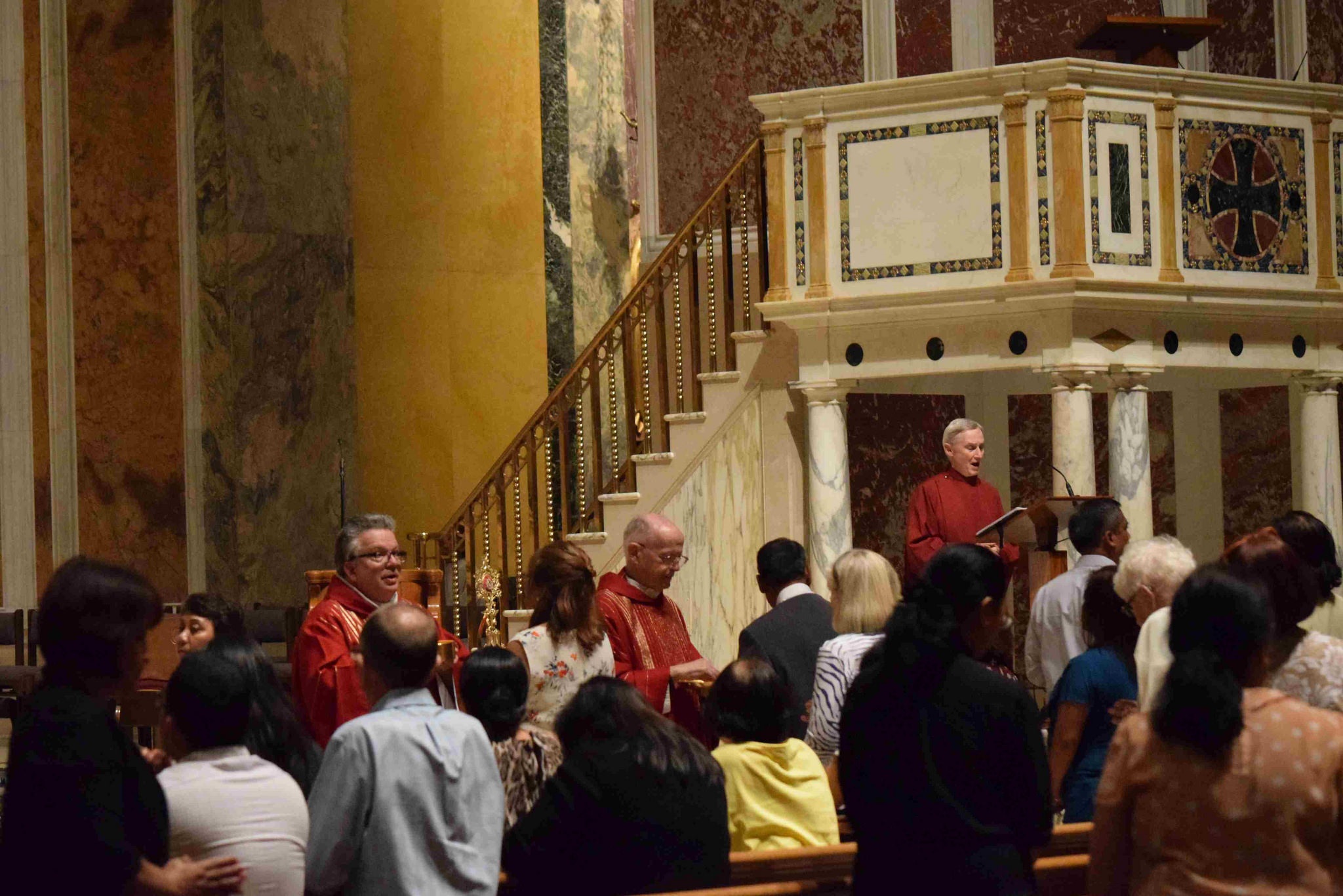 Thomas Stehle, Director of Music Ministries of the Cathedral and the evening’s cantor sang with The Madrigal Singers. Seated (l-r) are Deacon Clayton Nickel and officiating priest Father John Hurley. 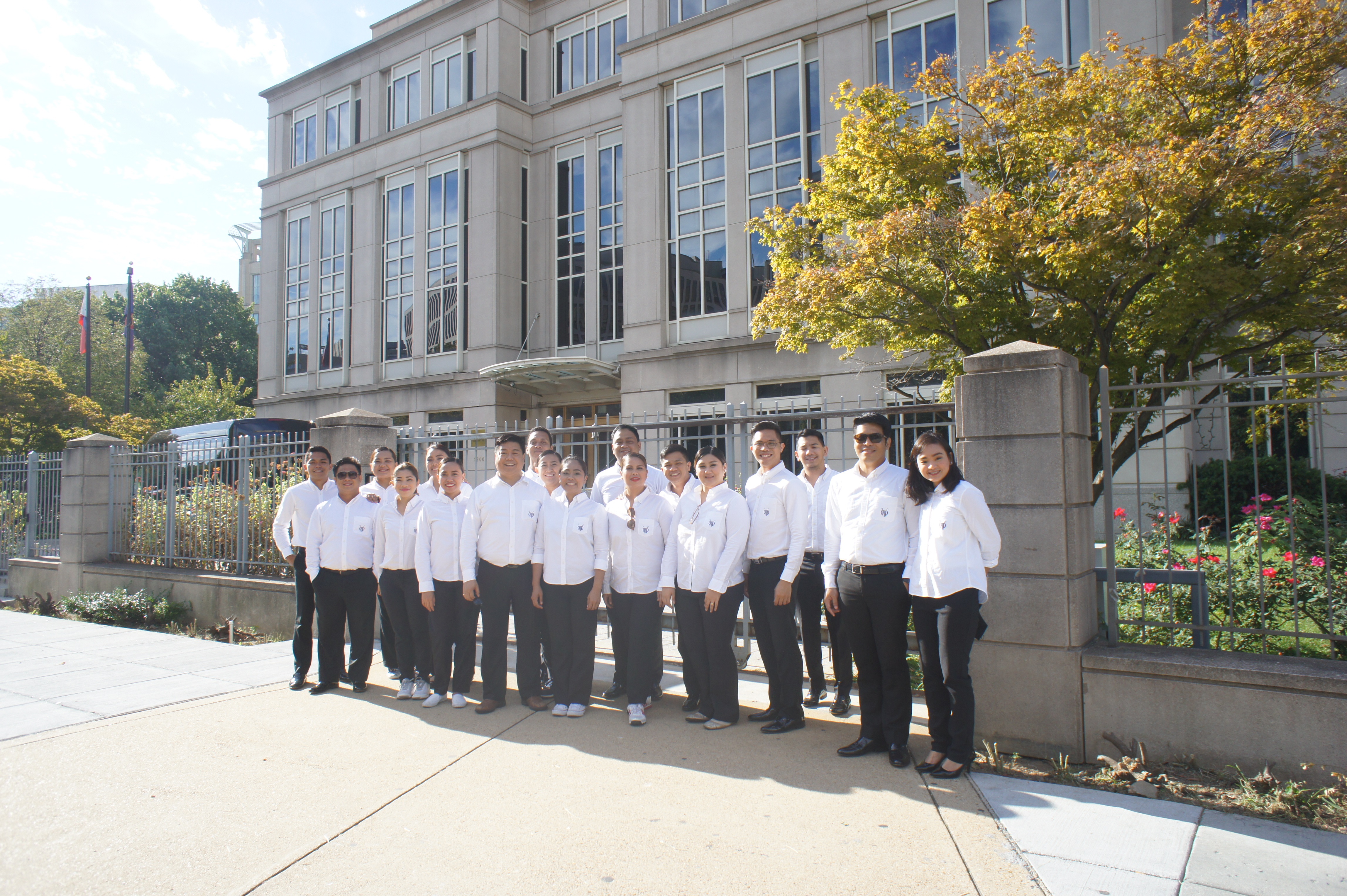 The Philippine Madrigal Singers, in front of the Embassy of the Republic of the Philippines, 23 September 2017.
Their visit to Washington DC was made possible through support by PLDT (US) Ltd. Reston Limousine assisted with transportation services for the group.